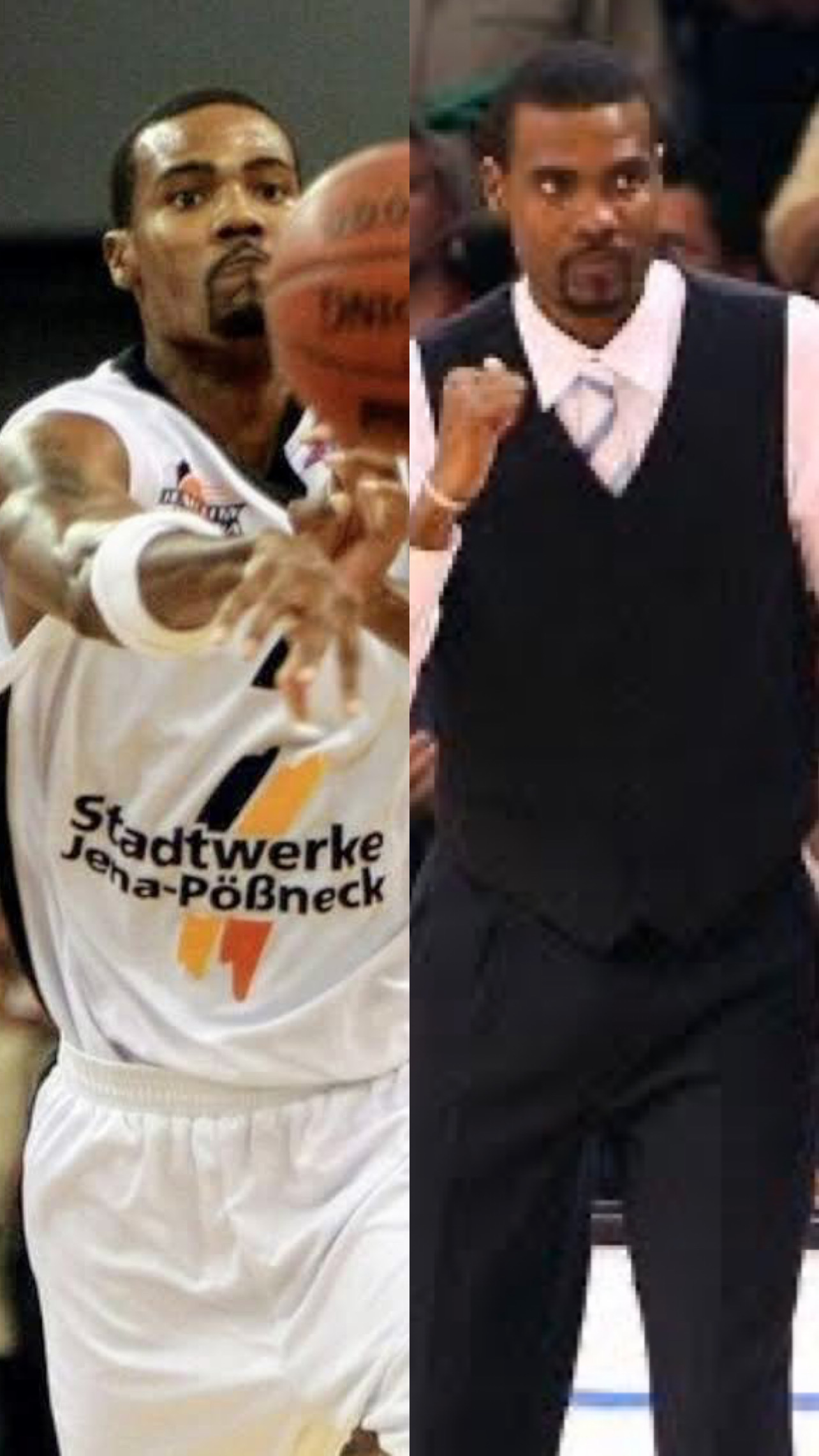 Basketball… To me, the twilight years of my career were probably the most exciting and noteworthy time. I have many stories I could share during this time, both good and bad. After leaving Switzerland for Germany, I played that first season for POM Baskets Jena in the 2nd League. The coach wanted to have an experienced player that would have a positive influence on the team. The interesting fact was that no one, not even those in the team management, expected us to be very good. The only ones that expected us to be good were the 12 players and our coach. We did not have the most talent, but we played hard and together. We surprised everyone by winning the 2nd league and promotion into the Bundesliga. In my second season in Jena, our name changed to Science City Jena, and we kept a majority of the players from the season before which proved to be a mistake. Not only did we not have the budget of other teams in the BBL, but we also had too many players that could not compete on the next level. Simply put, we were not good, and we lost a lot of games. I had already decided that it would be my last season before retirement and the plan was for me to come onto the coaching staff in Jena the next season as an assistant coach. My journey had different plans though. To make a long story short, halfway through the season, the coach was fired after winning only two games. Because we were anyway strapped for cash and could not afford to hire a new coach, the management asked me to take over as head coach. After two weeks of me saying “Hell no”, I finally relented and took over a team that I had just been a part of as a player. In the 20-plus years, I have lived in Europe, I have NEVER heard of such a story! Unfortunately, we still were not very good and after winning only 3 more games when I took over, we were relegated back to the 2nd league. Although it was not the normal way to start a coaching career, the experience of coaching in the Bundesliga strengthened my resolve to coach.

Life… Jena is a nice city in the former East German side of the country. I had reservations about going to an East German team in the beginning based on hearing stories that many racists lived there, but to be honest I had no problems living there. I realize that because I was an athlete, I was held to a different standard than other black people that lived there. I have no idea how it would have been for me had I not been a professional basketball player. I enjoyed my time in Jena. I lived there for a total of 3 seasons as a player and later as a coach without incident, except for the time when there was a Nazi demonstration gathering at the same parking lot that we always met to catch our bus for a game. Although nothing happened and I felt safe, I did have a weird feeling sitting and watching this demonstration unfold. Other than that, I loved my time in Jena.

Next… “Coaches are hired to be fired.” That is a famous coaching quote and although funny, it has some truth to it. After a five-game losing streak halfway during the season, I received pressure to win the next game during a meeting with the manager. It was an either-or situation. Either win the next game or be fired afterward. By the end of a heated meeting, I stepped down as coach because I felt I did not have the support that was needed for a coach with such little experience. Mind you, this was the same manager that asked me to take over the team. Looking back on it, I was not ready to be a head coach at the time. I was, however, a fantastic judge of talent, and my recruitment for that team was impeccable for the budget I had. I think with a more experienced coach, that team could have competed for a chance to move back up to the 1st league. After I was demoted to scout work for the team until the season was finished, I then made the move to youth basketball in Bayreuth, Germany where I took over their youth program. I was in charge of totally revamping the entire youth program and we did good work there that I am incredibly proud of. I was there for three years but I felt I needed the challenge of professional ranks again and served as an assistant coach in Cuxhaven in the 2nd division We had a fantastic season, and I would have liked to stay there longer, but because of an issue with the management about getting paid on time, I decided to leave. I then went back to youth basketball for the next three years in Braunschweig, Germany. It was there that I eventually retired from the game and began my current job as an educator six years ago. I think that was one of the best decisions I ever made. I miss basketball, and especially competition. I keep tabs on what’s going on in the basketball world through former players, and my coaching friends. I love hearing my friends’ stories and being able to offer advice. What I do not miss, however, is the time that basketball demands. Since I have walked away, I have realized how much time I spent just THINKING about the game, let alone how much time I was away from my family (both mentally and physically). My transition from the game was easier than most former athletes and coaches. Everything fell in line at the right time, and for that I am grateful.